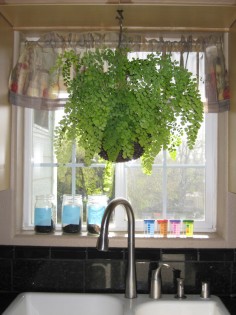 Welcome to the 2012 growing season!

Tomatoes and peppers are sprouting their first true leaves inside, under the grow lights.  The weather is warming up, and hardy vegetables like broccoli and cabbage have already been transplanted outside.  Before the beds get more crowded with this year’s plantings, there’s no time like the present to do some soil testing.  Not only to adjust the beds that may have been depleted in nutrients by last year’s harvest, but also to test the two new beds I installed for this year.  Those beds have been filled with a mixture of organic compost, vermiculite and peat moss.  Last year’s beds were filled with genuine ”Mel’s Mix” in a 1:1:1 ratio of these ingredients.  The two new beds have equal parts of peat moss and vermiculite, but a larger overall ratio of compost.  My idea is to sustain the tomatoes with less watering, since I believe compost holds more water.  Call it an experiment!

For the soil testing, I used a Rapitest branded kit, purchased at my local hardware store.  In the windowsill, you see three jars that I’ve labeled for the three beds being tested; the Northwest bed, the Northeast bed, and the new Big South bed.  Soil was extracted from each bed, from a depth of four inches.  The soil was given time to dry out before performing the actual tests, making sure it was well mixed and finely crumbled, taking out any big chunks of organic matter and stones. The test results are shown below. 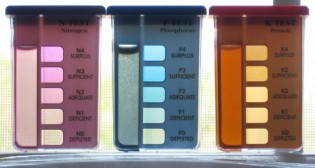 Potash: Higher than 4 – More Than Surplus

Potash: Higher than 4 – More Than Surplus

No adjustments to pH will be necessary.  To increase the amounts of nitrogen and phosphates in my soil, I’ll be adding dried blood and bone meal, respectively.  These are the organic choices available to improve the nutrient content of the soil.  If I was deficient in potash, the organic choice would be muriate of potash.

I’m surprised by the deficiency of nutrients in the beds, especially since the big new beds were just filled with a large amount of fresh compost, and last year’s beds were supplemented with nice bucket-fulls of the same fresh compost.  I’d assume compost to have a great deal of available nutrients in it!  This is a good illustration of why soil testing is so important – and a good lesson, not to assume anything.

Looking forward to a successful Spring in the garden!

I have not thought about testing my soil, I got black dirt from a big dirt yard, my dad seems to think that I didn’t need to add anything to it, I wasn’t sure. I didn’t add anything to it, but figured next year I would add compost to it. I do have some liquid fruit and veggie food that will add every day or so. We’ll see. It’s my first year gardening, so I don’t know about a lot of this stuff. Thanks for stopping by my blog and leaving your comment!