Trying to be Green, but Feeling Blue

I just realized a stupid mistake I made while building my garden.

My intention was (and is)  to build a healthy and fully organic garden.  I purchased organic soil (Mel’s Mix.) No chemical pesticides or fertilizers allowed, ever.  And I refused all GMO seeds, using only organic and heirloom varieties, most of which I purchased from local, family run businesses, and yeah, I got a few at Walmart.  My raised beds are naturally rot resistant Port Orford Cedar wood beds (an exciting topic for a future post.)  So what did I do wrong?

Well, when I went to level those beds, I used some old wood that was hanging around on the side of the house, to prop up the low sides and keep soil from escaping.  (Reclaimed materials sounds good so far, right?) What kind of wood was it?  Pressure treated lumber.  Evil.  If you want to learn more:  http://www.ecologycenter.org/factsheets/pressure-treated_wood.html

This wood was on the side of my house for at least seven or eight years, so it’s not leeching arsenic into my pretty new soil as quickly as it could if it was new.  And it’s only been there since February.  Also, the evil wood is probably not yet directly touching the soil, but is in contact with the decomposing cardboard I used as a weedkiller under the beds.  (I didn’t want grass and weeds growing up into my new bed, so I used a few layers of old cardboard as a weedbarrier.)

So, this weekend, I’m heading down to the hardware store for some redwood 2 x 4′s and will replace these boards.  This means removing all the edging that’s nailed to the sides of the beds, and pulling the evil boards out from underneath the propped up sides, without letting those sides fall.  Hopefully, some of the cardboard it’s touching is still intact and can be removed.  Then, I’ll be cutting the new boards, and coaxing them into place.  May the garden gods be with me, and not make this project too difficult.

Is it worth all of this work?  Of course!  I want poisons as far away from my garden as possible!  Maybe I’m being a little overly careful, but I officially have the creeps and don’t want to lose sight of my original healthy and organic goals.

Did I know pressure treated wood is toxic?  Somewhere in my mind, yes.  I remember learning as a child to never throw it in the firepit, because the smoke is toxic.  I just wasn’t thinking about “danger” at the time.  My innocent goal was to make my gardens level.  How are we supposed to be on guard at all times, protecting ourselves from the multitude of dangerous items that are so readily available?   Nevermind the radioactive particles falling on my garden from Japan’s nuclear disaster, but I do what I can do, as much as possible.

Now, if only there was a really good way to dispose of this evil wood…

Here’s a pretty photo of my Spring tulips, currently in bloom. You deserve a “pick-me-up” after such a sad story! 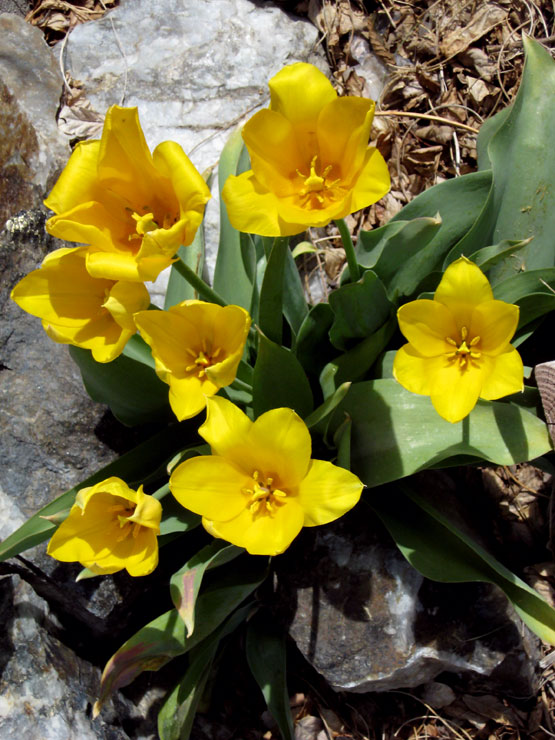